We’re now just seven weeks away from the big meeting at Cheltenham, and if you weren’t already licking your lips at the prospect, then this weekend could really whet the appetite.

Cheltenham, itself, plays host to Trials Day with a whole host of big names on show, while Doncaster puts on a real National Hunt showcase for the North with no less than three Graded races on their top-class card.

If that wasn’t enough, then how about a trip to Naas with the Irish track hosting another classy card on Sunday? With races like the Limestone Lad Hurdle on offer, there’s bound to be more than a few Cheltenham clues for March.

As always, our resident racing fan ‘Lucky Luke’ is back with his weekly scribble in the Cheltenham Notebook as he looks back at the week that has been, along with a few names to keep an eye on in the coming days.

As a racing fan in his mid-20’s, I think it’s fair to say that Altior is one of the best racehorses that I have ever seen.

After winning the Clarence House Chase, comfortably, at Ascot on Saturday he has now extended his unbeaten run over obstacles to 17 races. When (if!) he lines up in the Champion Chase at Cheltenham in March, he’ll be aiming to match the record of 18 set by the great Big Buck’s.

The doubters, if there are any when it comes to Altior, may have picked up on the fact that he jumped slightly left at Ascot, but with nobody joining him at the front end for company, there’s reason to think he was just getting a little lonely in front.

It certainly wasn’t a vintage Altior performance, but then again, it was never going to be with just two opponents to face. Nonetheless, he is still by far the star performer in this division and I don’t see anybody catching him up the Cheltenham hill in March.

The pink and green Ricci colours have plenty of memories when it comes to teaming up with Willie Mullins-trained mares. The name Annie Power needs no introduction, either in victory or in defeat.

Now I’m not saying that Camelia De Cotte is anywhere near the league of Annie Power, far from it, but it was still a red-hot performance from her at Thurles last weekend.

Leading from pillar to post in the hands of Paul Townend, the pair have forged a strong partnership that has seen them win five of their six chase starts together.

She has come alive since going chasing and will seemingly have options across the 2m and 2½m novice chase divisions when it comes to Cheltenham. Something like the Close Brothers, of which she is around 20/1, could be the one for her or even a punt at the JLT.

The return of Presenting Percy after winning the RSA Chase at the Cheltenham Festival last March has been a long time in the making.  But finally, on Thursday we got to see the ante-post Gold Cup favourite back in action.

Just like he did in 2018, he ended his break with a run in the Galmoy Hurdle at Gowran Park, and just like last year, he made it a winning visit.

Travelling nicely throughout under the usual hands of Davy Russell, he was pretty much in the right place at the right time at every point in the race. When asked to go and deliver his challenge he was as gutsy as ever, and despite facing a few challengers in the closing stages, he seemed to have plenty in the tank when he crossed the line in front.

It was a performance good enough for many of the bookies to cut him to an even shorter favourite for the Gold Cup. Now 3/1 from 4/1 at Betfred, he’s certainly short enough for an ante-post punt but with a record of 2 from 2 at the Cheltenham Festival he’s not the easiest to oppose given nobody else has set the division alight this season. 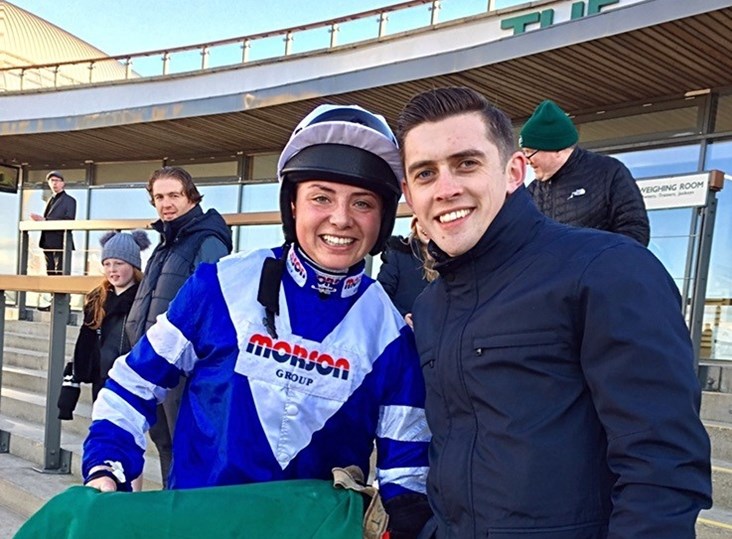 Billed as Cheltenham Trials Day, it’s a day in the jumps racing calendar that promises to deliver plenty of clues for the big meeting in March, and this year is no different.

There’re five Graded races on their seven-race card including dedicated trials for the Triumph Hurdle and the Ballymore.

The main event though is the Cotswold Chase, won a few years ago by the late Many Clouds. This time around, it’s Frodon that heads the betting and I’m expecting him to build on a great season so far with his first Grade 2 success outside the handicaps.

I was there when he won from the front at Aintree in October under the hands of Bryony Frost (pictured, left), and I’ve kept close tabs on him since. Two impressive weight-carrying performances have followed at Cheltenham, a course he loves, including a victory in the Caspian Caviar Gold Cup last month.

This is a step up in trip, but if he can dictate from the front, I can see him catching a few of these stayers on the hop.

Elsewhere on the card, I’m looking forward to seeing Black Op return to hurdling in the Cleeve Hurdle after a few failed attempts over fences. He was right up there as a novice hurdler, finishing 2nd to Samcro in the Ballymore before winning the Grade One Mersey Novice’s Hurdle at Aintree.

His course form is consistent as well, so if he takes to 3 miles, he’ll be a big player in the Stayers Hurdle come the spring.

Day Out at Donny

It’s been a bucket list thing of mine, for some time, to visit every racecourse in England. The likes of Aintree, Ludlow and Pontefract have been ticked off the list in recent years, so I’m kicking off the New Year with a first-ever visit to Doncaster.

My Mum’s side of the family originate from South Yorkshire, so it will be nice to head to a place where I’m told my Great Grandad’s had plenty of fun. I was hoping to carry that on by watching Lalor in action in the Lightning Novices Chase, but sadly the ground has come up a bit quick for my major Arkle fancy (5/1).

Instead, he leaves the Paul Nicholls-trained Dynamite Dollar to pick up the pieces in what is now just a four-runner event. The 6yo was a seven-length second to Lalor at Cheltenham in November but got the better of him at Sandown last month.

A victory over Kalashnikov then followed at Kempton just after Christmas and that bit of form would have to make him a live contender for the Arkle (6/1). I still think Lalor will be the one to beat in that, but Dynamite Dollar should have no problem in mopping up this weekend.

Despite a decent looking card at Fairyhouse on Saturday, the Irish angle on Cheltenham this weekend is likely best served from Naas.

The County Kildare track has a couple of tasty Grade 3 races on offer this Sunday with the Limestone Lad Hurdle at 1:50pm and the three-mile novice chase at 2:20pm.

The first of those features the talented Espoir D’Allen who bids for a seasonal hat-trick in the green and gold silks of JP McManus. He beat some nice types as a juvenile, including Mitchouka and Farclas, and has really come of age this season by winning Grade 3’s at Naas and Limerick.

He’s entered in the Champion Hurdle, and if his owner didn’t have Buveur D’Air targeting the same race, you’d have to say he’d be a lot shorter than the 16/1 currently on offer at Betfred. To me, he looks a good each-way bet in the NRNB market.

In the 3 miler, we see a return for Martin Pipe winner Champagne Classic. He ended last season by beating Penhill at Punchestown, so it’s no surprise to see him back over the same distance again at Naas.

However, Gordon Elliot’s horses sometimes need the run after a break, so preference is for Ballyward who steps back in trip slightly after being done on the line over 3m1f by Shady Operator last time.

See you at Donny!