A five-reel slot with 20 paylines and a non-progressive jackpot of £1,000, this engaging little slot harks back to the Middle Ages and is reminiscent of tales of Arthurian legend.

All the characters you’d expect to see are here, from the fair princess and her disapproving parents, to the brave knight in shining armour and the unfortunate dragon. It’s all done in a comical style, which pokes gentle fun at the genre.

You can stake as little as 20p (or as much as £80) per spin, so you don’t have to bet a king’s ransom to potential secure significant spoils.

Like any good quest, there are rewards on offer, with four bonus rounds, which are triggered by three spinning scatter symbols.

The first of the four is a Joust between two knights, sans horses. Here you have the potential to win up to seven free spins. You spin for either the red or the blue knight, then watch them run at each other. If the blue knight triumphs a cash prize is bestowed upon you, and either way it’s entertaining! 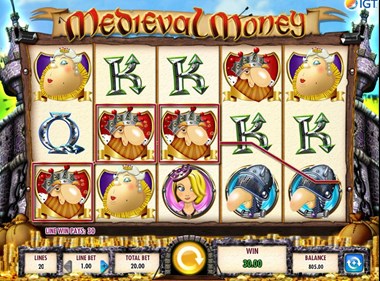 Moving on to the Spell Picker. Here, you are given a pouch of medieval money and asked to choose one of five potions. Each potion contains a cash prize, which you can accept or reject, until there is only one left.

The Money Bag Picker bonus is similar, except that you choose one of three money bags before the cash prize is revealed.

Finally, like any good medieval tale, we get to the dragon! A comedy dragon sits at the end of a trail, and a wheel which is strewn with skulls of slain knights, and the numbers one to three. If the wheel lands on a skull the bonus round comes to an abrupt end. Landing on two takes you forward to spaces but beware, there are obstacles built in to test your knightly valour. There’s the potential for a huge multiplier and another spin of the wheel, so remember, fortune favours the brave.

So don’t wait anon good sirs and fine maidens, gather your courage and venture forth!