Many of the best online slots have a strong fantasy element to them and Playtech’s ‘Rich Treats’ is no exception.

After all, what could be better than cake without the calories?

The slot’s reels are disguised in the form of a bakery window, with a mouth-watering selection of cakes on display.

From fondant fancies and Swiss roll, to cream-filled chocolate eclairs and pink-iced doughnuts, it’s a veritable feast for the eyes.

Even the lower value symbol letters J, Q, K and A are decorated biscuits. We can also see the silhouette of a baker through the window.

Framing the cakes is an appropriately candy-striped awning, and the spin button is shaped like a rolling pin. 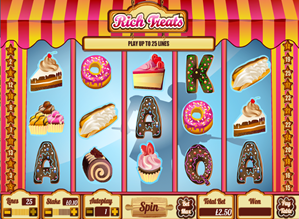 Behind the frosting, the format is fairly typical, with five-reels, three rows and 25 pay-lines.

Rich Treats doesn’t offer any wilds or scatter symbols, but the icing on the cake is the exploding reels.

Various terms are used for this feature, depending which online slot you are playing and, often, which manufacturer created it. Sometimes they are referred to as ‘tumbling reels’ or ‘collapsing reels’ occasionally even ‘cascading reels’ but whatever name they’re given, they do the same job.

Whenever you land a winning combination, the symbols will explode, making room for more cakes!

More cakes means more chances to win. The wilds will continue to explode until no more wins appear.

Available on the following online casinos: