What a difference four years makes

March saw ActiveWins celebrate our four-year anniversary and the strides we have made in that time have been remarkable.

A start-up business of just three people (including our very own Affiliate Director extraordinaire, Natalie Merrison) has now blossomed into one of the leading Digital Agencies in the North West, boasting over 100 exceptional employees. In fact, we ranked number 21 out of the top 100 in the North West, and 7th among Manchester agencies. 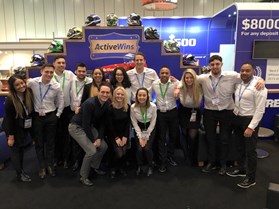 Progress has shown no signs of slowing in the past year. The ActiveWins team have been busy making an impression at the last three Affiliate Conferences in Amsterdam, Berlin and most recently London.

Affiliate program favourites Kerching and Bucky Bingo have been given swanky new facelifts while our team has been on hand to assist industry giants Betfred in promoting its Betfred Vegas product.

A selection of Betfred’s most talented staff have joined the Manchester city-centre-based team in a merge that strengthens our partnership with the world’s largest independent bookmaker.

And the icing on the cake was the addition of Foxy Casino to the ActiveWins family. There was no better way to celebrate than with a three-day trip to Tenerife to bask in the sunshine.

Natalie said of the trip: “Company trips are always good for the staff to get together and bond as a team, especially when they work as hard as our affiliate team do.

“These trips are definitely worthwhile. With the continued growth we are seeing each year, we are already looking forward to the next one.”

A jam-packed schedule in the picturesque setting of Costa Adeje was kicked into life with the first of the organised events, the beach party on the Puerto Colon shoreline.

Whacky races on the sand were followed by questionable karaoke and equally confusing dance moves. The ActiveWins team were a sight to behold with umbrella hats and even corn-rows being sported as the evening gathered pace. 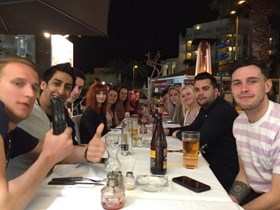 The morning after the night before, an easy day by the pool nursing those sore heads right? Wrong! This was a business trip, after all.

The entire company was up bright (ish) and early and down to the conference room in the LABRANDA Isla Bonita Hotel ready for each senior manager to present updates and performance reviews from their respective teams.

The Marcom team may have defended their crown with an imaginative mash-up of Mission Impossible, but Eliot was keen to point out just how well everyone had performed.

“With the recent increase in staff at ActiveWins, it was great to see so many new faces socialising throughout the trip and playing their part in the brilliant talent show.

“For me, the best part of the trip was seeing so many people from different departments mix and get to know each other. It makes for a fantastic working environment.”

The socialising was far from over at that point, as we climbed aboard the Freebird One Catamaran for an afternoon on the Atlantic.

Half of the vessel would agree that the beautiful sun shining down on the horizon coupled with the company of a school of dolphins was a small look into paradise. The other half wouldn’t be able to tell you one way or another having spent the majority of the trip below deck feeling a little queasy. 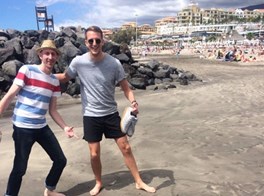 The remainder of the time spent in the Canary Islands followed in the same fashion – with plenty of dodgy dancing, shoddy singing and laughs aplenty.

After another 12 months of ‘smashing’ it, we’re not about to sit back and rest on our laurels now. We’re all back in the office looking ahead to another year of incredible progress for our industry-leading affiliate program.

Want to find out more about working alongside this team of driven, ambitious individuals? Drop us an email at [email protected].